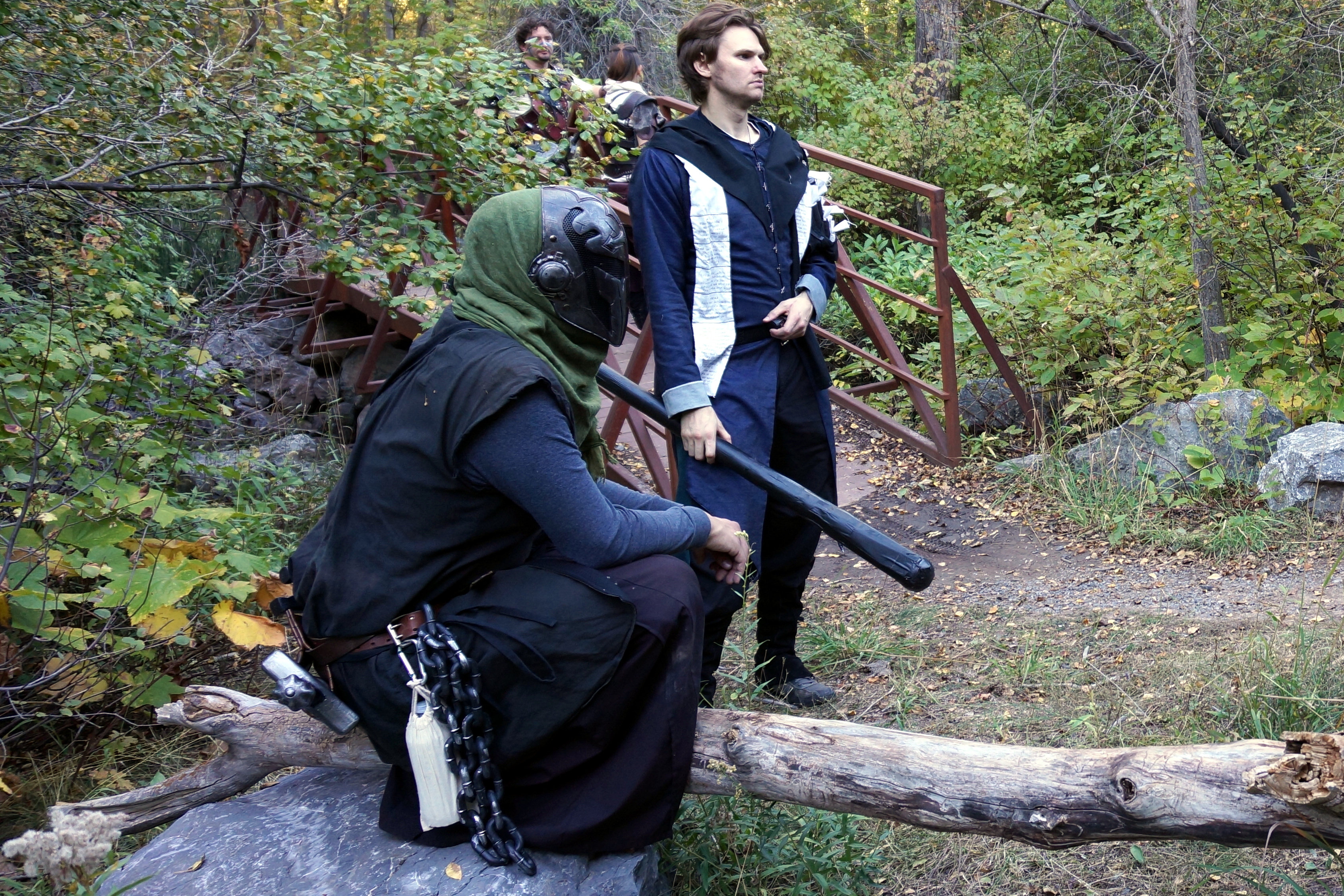 I have been asked to briefly explain the history of Rexerit. Needless to say that is no easy task. It is difficult to figure out what belongs in a “brief” history, let alone one where the timelines are never quite what you’d think. On the subject of time alone I could write a dissertation that would leave the professors at the University in Kerasat with their jaws on the floor.

What is worse, what I am writing now will not be what you read. No, names will have disappeared. Words erased. Context changed. That is, if the text even still remains by the time it reaches you. It seems that there are forces in this world that even the immortals do not yet understand.

This world has succumbed to a plague. It is not something that can be easily cured. It is not a disease that affects people, but one that effects the written word. And worse yet, it seems to specifically be targeting history, causing my people to struggle to find their continued purpose in this world.

As he      would say, it is vital that information be spread. And with that, I mostly agree (though some must be introduced more… delicately). That is why I agreed to write this.

The Reformation is what we now call the beginning of our new world. It has been nearly eighty years since the world was thrown into chaos. People around the world woke up one day, only to look outside and no longer see a sun (a giant glowing orb in the sky, similar to our six navigational stars, but radiating warmth and moving across the sky throughout the day and disappearing at night). The topography of the land around them had changed. The stars in the sky had changed. Invisible walls of death, later to become known as vicis, spread themselves, like cracks along a broken mirror, across the countryside. What we know now, is the world was rebuilt.

Rumors of what happened still make their rounds. But I can tell you without question that this was the work of the demigods, in an attempt to save us (on some of their parts). If those that seeked to help actually succeeded appears to still be up for debate.  Some of them that remain have given up hope and left us, if hope is a trait that they ever had to begin with.

While much has changed in those eighty years, much has not. Vicis still cross the land, irreversibly aging any who pass through them. Some storms pass untouched through some of the vicis walls, and others disappear as if they never existed. The sun still has not returned, and likely will not ever. Our navigational stars have never moved.

Yet, while some things remain unchanged, others are volatile. Political relations have only worsened in that time. Ver’er tides became overwhelming frequent until one day they simply ceased. And delicate political tensions have caused numerous wars.

The first large war in our new world was initiated by Claft. As we all know, they nearly eradicated the Ixians and their homeland, sending them fleeing as refugees across the world. Other small skirmishes for power and declaring borders came up. That is, until the Blood Calculator Empire stepped in and demanded there be universal agreed upon laws. Those laws consisted of a unified currency, agreed upon borders, and trade regulations.

It is ironic that the nation demanding peace would be the one to instigate the war that consumed the world, isn’t it?

The Emprie’s War is by far the most notable event to have happened in recent history. The Blood Calculator Empire, host to the largest land army on Rexerit, poked and prodded at its neighbors. Their elite forces known as the Tide Breakers, reserved for protection against Ver’er tides, staged attacks around the world. Three of the attacks are most notable: In Luja they destroyed the deep rot – an arrangement of undead that store and process information. In Spiorad they annihilated several of their key monuments – effectively killing hundreds if not thousands of Spiorad around the world. Their spies in Lo-Gone manipulated their way into the government to make certain their knowledge wells would not be restored to their previous potency. Luja withdrew from the world, abandoning their trade networks, and returning to their isolationist policies. In addition, the Luja offered no further assistance in staving off Ver’er – the massive red creatures that only become more powerful as they cross through vicis, and do not stop their path of destruction until they are dead. This left the Tide Breakers as the only trained force to deal with the growing number of tides. Spiorad and Lo-Gone retaliated with war, and did so quite effectively for a while.

The Ex-Durian Empire came to the Blood Calculator’s aid with their unchallenged naval forces. Rapidly they effectively nullified Lo-Gone’s troops - yet not before Lo-Gone, and their unquiet dead known as the Keriji, wreaked havoc on the Judges of the Empire (magical manifestations of the laws of the land that were unique to the BCE). Tinker was intimidated into assisting the two powerhouse countries through trade.

An Ixian prince, who research has shown had no blood claim to his throne, with an irrational grudge threw his forces at the Blood Calculator Empire and its allies. It took only a few months for his forces to abandon him, as they had no real cause in the fight. Folamahione organized guerilla warfare against the Empire, successfully utilizing the BCE’s previously minor transgressions against them as their rallying cry. They managed to recruit many Bojovnici mercenaries to their cause.

The united, albeit disorganized, forces struggled in their fight against the BCE and Duria. The rest of the world began facing a suspiciously increased rate of Ver’er attacks during this time. Torashone and its bloodthirsty barbarian army organized under their new Warlord and fought to stave off the Ver’er attacks in many of their neighboring nations in place of the Luja and Blood Calculator Tide Breakers. The tribes carefully stayed out of the war until an botched assassination attempt was unexpectedly successful and took the life of the Warlord’s unborn child; they then entered into the war with a fury fighting alongside their new Duuntay’un allies.

Using the surrounding chaotic cover of war, the Vegemon raided Yexelade, their primary agricultural competitors, and set fire to a large portion of their Ancestral Forest.

The war itself dragged on for several more years. Finally, the Blood Calculator Empire’s forces began to wane. The citizens looked at their government. They saw politicians sending their youths to be forcefully aged before being sent to their deaths; they saw that the supernatural law enforcement from the land had disappeared; they saw their nation in chaos and wanted no more of it. The people revolted to have law and order restored – and for their leaders to be tried by the people. They rose their white flag, followed quickly by the surrender of Duria and Tinker.

Since the war, politics have settled internationally, though they sit precariously on a tower of glass. Trade has recently reopened with Blood Calculator while their new government is still carefully monitored by their neighbors. But even with the cautious peace, tensions flare frequently due to documents and their unreliable nature.

Three years before the war’s end, it became widespread knowledge that somehow written words were changing. Not just those carved in ink, but those in stone as well. In response, all documents of importance were moved to the Shoz’zai library. It was believed that a ritual placed there was keeping the documents safe from these source-less changes. And it worked, for a while. Two years before the war’s end, that protection ceased to be effective, though its changes started small. Just as the war was starting to wane, right before Terashan was brought into the fight, all of the trade agreements, treaties, memos, and other documents altered just enough to reignite the flames. Trade favored those who were already wealthy. Treaties were filled with loopholes.

And then one year before the war’s end, all of the documents inside the library were found blank.

Documents outside the library still remain with the ink on their pages, though how accurate those words are varies.

Otherwise we are doomed to repeat it.

Utah LARP was formed in 2016 in order to host live action role playing games around the Salt Lake valley area in Utah. We pride ourselves on our simplistic European inspired rules, high production quality, and story-focused games.